The sport of boxing has a tradition of passing forward the knowledge learnt from the previous generation and onto the next generation. B-30 was created in 1930 and since then we have seen passionate coaches and leaders develop boxers to reach goals even themselves found impossible. Many boxers continue as coaches and leaders after they have boxed their last figt, passing their knowledge forward. As we know this corresponds to boxing clubs throughout the world.

In our travels we experience the global boxing family taking care of each others athletes to contribute to their development and success.

By Legacy Box Cup our club honours the trainers, leaders and boxers that has inspired so many to train hard in the noble sport we all love.

By Legacy Box Cup we want to honour the sport of boxing and the values that it represents; respect, discipline, hard work and humility. And Glory.

Welcome to Legacy Box Cup to fight for

B-30's boxer Henry Tiller started his career as a 17 year old in 1931 when he became Norwegian Youth Champion. He obtained 5 Norwegian Elite Championships before the Second World War broke out and put national championships on hold.

In 1936 he participapted in the Olympic Games in Berlin. After four victorious matches Tiller lost the final towards the French boxer Jean Despeaux, and received the Olympic silver medal. Later the same year Tiller got the honour of meeting the same Despeaux twice, both times defeating him. One of these matches took place in Trondheim, and the crowd went wild when thousands of spectators witnessed Tiller defeat the reigning Olympic Champion.

Henry Tiller boxed a total of 158 amateur matches, whereof only 22 losses. Tiller went professional in 1940, but only boxed a handful of matches in 1940-1941. Tiller also participated in a showmatch towards the reigning professional heavy weight world champion Ingemar Johansson in 1959.

When Henry ended his active career he contributed in our club as a coach over several years. Morten Skotnes, coach in our club throughout many years, rememebers Tiller as a determined and skilled coach that with his skills, merits and proffesionalism became a role model for many of his successors.

His memory lives strongly within the hearts of those who got to know him, and his spirit is still with us.

B-30 will continue to tell stories about some of our great profiles, as this is what Legacy Box Cup is about; to honour the persons that has done the ropes and brought their experiences forward to the next generation.

Our club have had several great boxers, but the greatest of them all may be Svein Erik Paulsen, also known as "The Nail". His career is unique in Norwegian boxing history! A long amateur career resulted in six Norwegian and two Nordic Elite Champion Titles, as well as participation in the Olympic Games in 1972. He also qualified for the Olympic Games in Mexico four years earlier, but sadly an injury prevented him from that.

His career lasted for 17 full years, and he boxed hos last prfessional match in Bergen in 1978. At his best he was ranged nr. 2 in the world by the recognized boxing magazine «The Ring Magazine». He was awarded Mid-Norway highest athletes distinction; the Olav Statuett in 1974.

Svein Erik was and is a monument in Norwegian athletic history. After he ended hos active career he has contributed as a coach both in his Mother Club B-30 as well as in our neighbour club Ulfan. In B-30 we are very proud of "The Nail" and he is a great source of inspiration for our up-and-coming talents!

One of our best boxers at the late 1970's and beginning of the 1980's was without doubt Morten Skotnes. During several years he was one of the boxers that it was uncomfortable to encounter in the square ring, mostly because of his superior technical and tactical skills. He was Elite Norwegian Champion in 1981, as well as victorious in several tough international tournaments, team events and national team tournaments.

A lot of the knowledge that Morten has regarding boxing he has passed on to others through a fantastic career as a boxing coach. Not many coaches have meant as much to recruiting and talent development within boxing as Morten Skotnes!

During the late 1990's and the beginning of 2000's Morten produced several top athletes, both male and female. In this period B-30 won both Federation's Cup, Royal Cups, as well as several international medals, and Morten deserves a great deal of the credit for these achievements. For several years he also was an important part of coach team of the female Norwegian national team. In this period several of the best female boxers in the world were Norwegians. Two of these girls, Ingrid Brevik Hegle and Kari Jensen, represented B-30 in several international championships, and both took medals in the Elite European Championship!

You can still meet up with Morten in our gym, helping both young and more experienced athletes in their struggle to reach the top in Norwegian boxing. He is indeed one of the persons that has left a serious footprint in our club during the last 40 years! 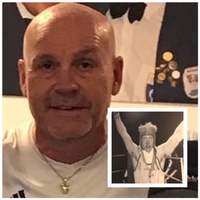 B- 30 is a club you feel belonging to. If you are a member of B-30 you very seldom change club. One may be away for longer or shorter periods, but at a time you by and large come back to the club.

This goes also for Frank Wahl. Frank boxed for the club in the 80's, and already in 1988, at the age of 19 years, he won gold in the Elite Norwegian Championship by defeating his team-mate Stig Hagen in the finals. In addition to the Elite Title, Frank also achieved many strong results both at home and international.

After a few years away from boxing, Frank came back to the club. Through many tough and even fights at the end of the 90's and the beginning of 00's he demonstrated that he still was a boxer that could claim his place at the very top of Norwegian boxing. Frank never feared meeting anyone, and the opponents that went up into the ring against Frank knew that it took solid hard work in all three rounds to beat him.

After a long and rich career, the latest years Frank has contributed as coach in the club. The competing boxers has learned a lot from Frank's knowledge and experience from a long boxing life, and Frank cultivates future fighters from the young boxers. Today Frank is an important part of a great team of coaches that we hope and believe will bring B-30 honour and glory in the future!